On Friday, Scafell had a wonderful visit from our local police and the NFU (Country Watch). Cumbria Constabulary and the National Farmers’ Union (NFU) have teamed up to create Country Watch – a scheme that will specifically tackle farm based crime in Cumbria. Because of their fantastic work, they asked all the schools in the area to design a logo for their team.

A few months ago we were told the great news that R.P and E.M were shortlisted, amongst other schools to win the logo design. On Friday, even better news came with E.M being told she had won the logo competition for Cumbria!

E.M received her printed logo and a NFU country watch hoody with her logo on. Very exciting! Look out for Erin’s logo on Facebook NFU and the local country watch team hoodies. 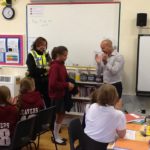 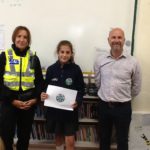