Last Friday it was Comic Relief Day, so  our School Council decided that we would dress up in red: some of us even dyed our hair while others painted their nails! We also had a red nose competition where the children designed a red nose. The winner was Dougal with his spider nose! At break we had a delicious cake stall which sold cupcakes and biscuits with a red nose twist. Everyone had a red nose to wear: Erin even got the ultra rare Frankenstein nose!

by Amelia and Holly 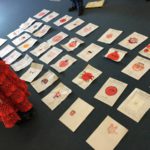 Well done and thank you to everyone who dressed up, made and bought cakes and entered our Red nose competition.  We raised a staggering £235 in aid of this incredibly important event.  During out afternoon Good Work Assembly we watched a video all about a boy living in Sierra Leone who had become an orphan after the Ebola Crisis.  Our hardwork will enable children like Hassan to get back to school and achieve their goals in life!  Hassan wants to be a doctor – we hope our money might help him get there!