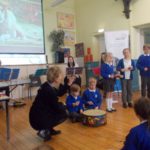 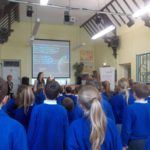 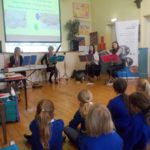 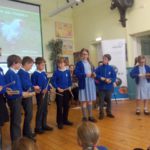 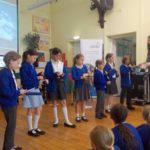 On 18.5.17, four people, in a little orchestra from Cumbria Music Hub, played us five tunes from the Carnival of the Animals – the tortoise, the lion, the kangaroo, the swan and the cockerel. There were 2 flutes, a keyboard, a clarinet and a bassoon. The tortoise was a really slow piece like it was plodding along. The cockerel going cluck was really short and spiky, in other words staccato. The swan was smooth and gracefully played, in other words legato. The lion’s tune sounded really royal as lions like to be king of their kingdom. It was very jumpy in the piece for the kangaroo.

The lion was the most popular piece in Skiddaw Class.

“I really liked the kangaroo’s tune because it was high and jumpy like an actual kangaroo!” said Daisy.