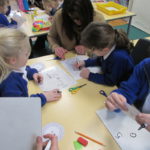 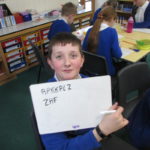 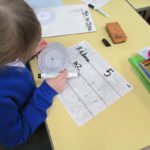 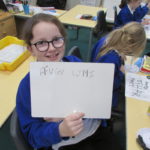 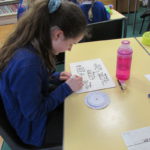 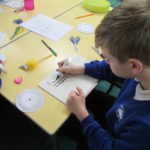 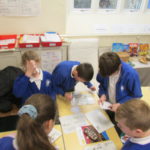 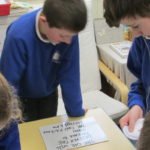 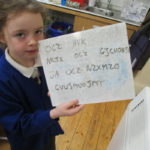 What’s with the crazy letters? Keyboard broken? No! Just KS2 getting up to some sneaky spy business. With nearly half of KS2 out at the cross country event doing amazing things, we had some time to take ourselves back to the days of the Enigma machine.

Secret codes are always useful. From writing in a secret diary to sharing confidential battle-plans in times of war, making sure other people can’t read your messages without permission can be really important. But how does it work? And, more interestingly, how do clever people break encryption codes to get at the secret messages within?

We started by learning about the Caesar Cipher – a technique used to take an ordinary message and “shift” the letters so that they can no longer be read. We made our own encoding machines and wrote plenty of secret messages. If somebody knows the encryption key (how much the letters have been shifted), they can easily decode the message.

But what if we don’t know the key? Well, the “key” to solving that problem is to look for common patterns. Some letters (like e) are used all the time in the English language. Other times, you can spot words which follow the same pattern. Most useful of all, you can look for unique words – we looked for single-letter words. These are probably only going to be “a” or “I”, so we’ve already got a great start to decoding.

Once we’d worked this out, the entire classroom turned into a well-oiled decoding machine, intercepting secret messages from Mr Dean and decoding them to find out what on earth he’s talking about! Maybe he really is a spy after all!